The Supreme Court, on June 25, 2015, upheld a key part of the ACA allowing the availability of subsidies for all Americans. Check back for updated analysis.

Opinion: With the ACA enshrined in law, it is time to implement smart health care reform in Texas. From Ken Janda in the Houston Chronicle

King v Burwell news and materials prior to the decision. 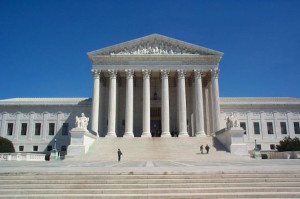 The U.S. Supreme Court is reviewing a challenge to the portion of the “Patient Protection and Affordable Care Act (ACA)” that could impact the subsidy (Advance Premium Tax Credit or APTC) many Texans receive – almost 1 million Texans. Texas did not set up its own exchange under the ACA, but instead chose to utilize the federally facilitated exchange (Healthcare.gov). The case, named “King v Burwell,” came to the Court because some have questioned whether the subsidies should still apply in a State that does not establish its own exchange. New Healthy Texas believes the tax credits (subsidies) should apply to all qualifying Americans no matter which state they live in. The Court is expected to issue a decision this month as to whether subsidies are allowed on the federally facilitated exchange (Healthcare.gov).

Read more from the Houston Chronicle and San Antonio Express-News: “A million Texans’ insurance at risk in court’s ruling.”

Are premium subsidies available in states with a federally-run marketplace? Read the Kaiser Family Foundation guide to the Supreme Court argument in King v Burwell.